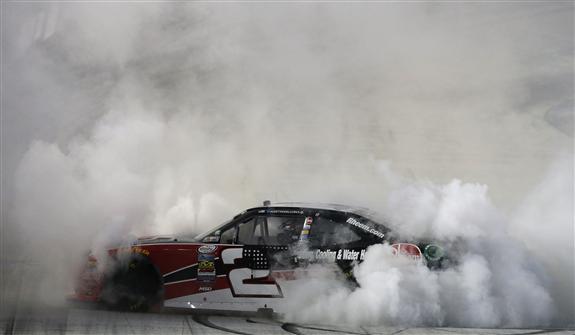 Dillon didn’t take the top spot until Lap 305 of 308, when Brad Keselowski’s No. 22 Ford ran out of fuel while leading under the eighth and final caution of the evening.

Driving a No. 2 Richard Childress Racing Chevrolet that slipped noticeably in Turn 3 on the white-flag lap – just after crossing the overtime line at the entrance to the corner – Dillon nevertheless held off Allgaier, third-place finisher Kyle Larson and fourth-place Elliott Sadler, who swapped positions behind the winner on the two overtime laps.

Dillon crossed the finish line .227 seconds ahead of Allgaier, who won a drag race against Larson off the final corner. And in Victory Lane, Dillon stayed busy counting his blessings, not the least of which was a shout-out to fiancée Whitney Ward, who recently accepted Dillon’s marriage proposal.

“It was just a war of attrition,” said Dillon, whose new crew chief, Justin Alexander, got his first victory. “We had a pretty good car – maybe not the fastest car – but the car that won. I made a mistake in (Turn) 3 coming to the white, but, luckily, everybody else got loose…

“It was just a war of attrition, and we did what we had to do to win.”

Keselowski’s empty fuel tank was simply the last domino in a sequence of events that put Dillon in position to win for the first time at Bristol – or on any short track for that matter – the second time this season and the eighth time in his career.

“I just made a mistake,” Jones said ruefully. “I basically turned the 19 (Suarez). It’s unfortunate. I feel bad for Daniel and I feel bad for this team and my guys. The (car) was really good, and it deserved a good finish and was probably good enough to win.

“I just threw it away on that restart and tried to make too much happen too quick. Just trying to get back in line behind them before the others got there, and I wasn’t clear. Just mad at myself.”

The pivotal wreck that followed was even more dramatic. Keselowski and Kyle Busch were fighting for the lead on Lap 296 when Busch tried a pass in the lower lane and slid his No. 18 Toyota up the track in front of Keselowski’s Mustang.

Unwilling to surrender the position, Keselowski maintained his momentum off the corner, clipped the right rear of Busch’s Camry and sent both cars into the outside wall. Keselowski was able to continue, but Busch blew a tire and shot up into the outside wall in Turns 3 and 4, collecting Ty Dillon, younger brother of the race winner, who was running behind – and who had led briefly after a restart on Lap 287.

“Kyle is, of course, real good at this track, and he was quite a bit faster,” Keselowski said. “I was just trying to hold him off anyway I could. He got a good run on the bottom, and the bottom groove was just a little bit faster in (Turns) 1 and 2 than it was in 3 and 4. He knew that and made a really smart move and got up next to me, but I had a big run on exit and he wasn’t quite clear.

When the race went past its posted distance and Keselowski had issues picking up fuel under the yellow, that left Dillon to hold off Larson, who had led 200 laps at that point.

With advice from his grandfather and team owner, Richard Childress, Dillon picked the outside lane for the final restart and pulled out a victory that would have seemed an unlikely outcome just 50 laps earlier.