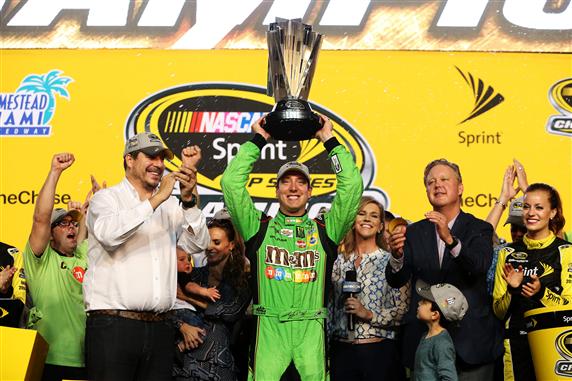 HOMESTEAD, Fla.—Finishing off one of the most remarkable comebacks in NASCAR history—indeed, in the annals of sport—Kyle Busch won Sunday’s Ford EcoBoost 400 at Homestead-Miami Speedway and, with it, his first NASCAR Sprint Cup Series championship.

Absent from the first 11 races of the season because of a broken right leg and left foot sustained in the NASCAR XFINITY Series opener at Daytona in February, Busch pulled away from fellow Championship Round driver Kevin Harvick after a restart with seven laps left and crossed the finish line 1.553 seconds ahead of the defending series champion.

“I don’t know if I understand life yet, but there’s something to be said about this year,” a jubilant Busch said after crossing the finish line.

Indeed. The victory was Busch’s fifth of the season, his first at Homestead and the 34th of his career. The championship was the first by a Toyota driver at NASCAR’s highest level. It was the fourth for Joe Gibbs Racing with three different drivers, with Bobby Labonte (2000) and Tony Stewart (2002, 2005) preceding Busch in that achievement.

Kyle and Kurt Busch, who won the first Chase for the NASCAR Sprint Cup in 2004, make up the second pair of brothers to win Sprint Cup titles, joining Terry (1984, 1996) and Bobby Labonte.

In his final NASCAR Sprint Cup Series race in the No. 24 Hendrick Motorsports Chevrolet, Jeff Gordon, who was seeking a fifth series crown, finished sixth behind Brad Keselowski, Joey Logano and Kyle Larson to secure third place in the series standings behind Kyle Busch and Harvick.

Martin Truex Jr., the fourth driver eligible for the title in the Championship Round of the Chase, finished 12th on Sunday.

“It’s pretty unbelievable!” Busch said. “A dream of a lifetime, a dream come true… I just can’t believe it, with everything that happened this year and all the turmoil, all the things that I went through, that my wife (Samantha) went through and the people that are around me went through.

“This championship is all for these guys, my wife, my family, everyone who has had to sacrifice so much to get me here to this place today, whether it was on my team right now, or on my teams in the past. It’s really awesome, awesome, awesome!”

Busch was running third, behind Keselowski and Larson—and roughly 10 seconds ahead of Harvick in fourth—when NASCAR called the seventh caution of the race because of debris on the frontstretch on lap 257 of 267.

After all contenders came to pit road for fresh tires, Busch restarted second beside Keselowski, who chose the inside lane, with Harvick immediately behind Busch in fourth.

Busch held his own through the first two corners, cleared Keselowski down the backstretch and began to pull away. Harvick also shot past Keselowski’s Ford on the restart lap, but the defending champ couldn’t match Busch’s pace over the last seven laps.

“On the restart, I just knew, ‘Don’t spin your tires,’” Busch said. “If you spin them a little bit, at least get them reattached – don’t matter if you lose a little bit of ground to who’s in front of you, just make sure you have a good run getting into Turn 1 and keep Harvick behind me.

“Did all of those things, got to Turn 1 side-by-side with (Brad) Keselowski and, man, I just put it on kill and held it wide open through there and was able to get by Keselowski there. And anybody that got out front, especially on new tires, they could drive away, and it felt so good to be out there at that moment.”

The restart gave Harvick one last chance to defend his crown, but the driver of the No. 4 Chevrolet couldn’t capitalize.

“I thought there at the end at the restart, we might do a little better than that,” Harvick said. “But, obviously, either the splitter was on the ground or the car was just tighter than it probably needed to be, and I just couldn’t hustle it and got it tight and got it up the racetrack and got behind.

“The 18 car (Busch), he just had the speed all night, for the most part. As the night went, I just couldn’t find anywhere that would make the car run better. The higher I would run, the looser it would get. I’d get on the seams, and then it would push the front and slide the back. Just never could find anything.”

Harvick, who won the final two races of 2014 to secure his first title, finished second for the 13th time this season. With his three victories, he finished the year with 16 top-two results.

“It’s been a great couple years, and I know we’re disappointed about finishing second tonight, but it’s kind of the theme of the year—finishing second,” Harvick said.

“Unfortunately, it’s just one short, but all in all, it’s been a great couple years, and I couldn’t be prouder of our bunch of guys.”

Note: In the final race for Michael Waltrip Racing, Clint Bowyer wrecked on Lap 45 and finished 43rd. Bowyer will driver for owner Harry Scott next season before taking over the No. 14 car at Stewart-Haas Racing in 2017. David Ragan ran 27th in MWR’s swan song. 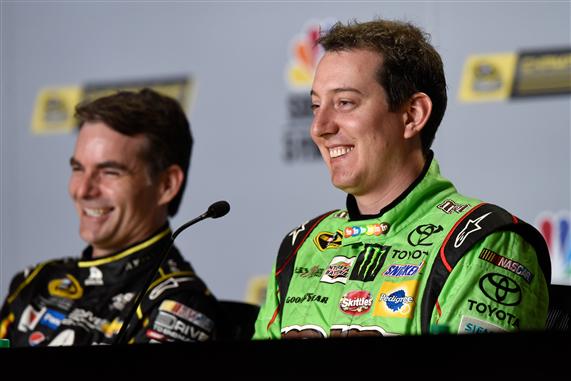 DAYTONA BEACH, Fla. (Nov. 22, 2015) – Only nine months removed from suffering a broken right leg and left foot in an accident at Daytona, Kyle Busch won at Homestead-Miami Speedway to capture the 2015 NASCAR Sprint Cup Series championship. The title is the first for Busch and Toyota.

To take home NASCAR’s greatest prize, Busch needed to finish ahead of the three other Championship 4 drivers – Kevin Harvick, Jeff Gordon and Martin Truex Jr. – in the final race of the Chase for the NASCAR Sprint Cup at Homestead.

Busch and his brother Kurt Busch (2004 NSCS champion) join Terry and Bobby Labonte as the only brothers to earn NSCS titles.­­­

Missing three months – a span of 11 races – due to his injury, Busch returned to his No. 18 Toyota at Charlotte in May, showing signs of rust by logging two finishes worse than 35th (36th at Dover; 43rd at Michigan) in his first four points events. He rounded into form his fifth race back by speeding to Victory Lane at Sonoma, catalyzing a dominant run of four wins in his next four starts, including three in a row at Kentucky, New Hampshire and Indianapolis.

Entering the Chase for the NASCAR Sprint Cup as one of the favorites to take home the crown, Busch gutted his way through the first two rounds, highlighted by a runner-up showing in the Challenger Round cutoff race at Dover. He hit his stride as the only driver to log top-five finishes in each Eliminator Round race to set up his championship effort at Homestead.

Busch joins Bobby Labonte, Brad Keselowski and Kevin Harvick as the fourth driver to earn both a NSCS and NASCAR XFINITY Series championship. His title marks the fourth for Joe Gibbs Racing, which also won championships with Bobby Labonte (2000) and Tony Stewart (2002, ’05).

Toyota, which began full-time racing in the NSCS in 2007, has now captured a driver’s championship in all three NASCAR national series. Busch also won Toyota its first NSCS race at Atlanta in 2008.

Busch is the second consecutive champion to win the title with a victory in the Championship Race at Homestead-Miami Speedway. Harvick accomplished the feat last season. 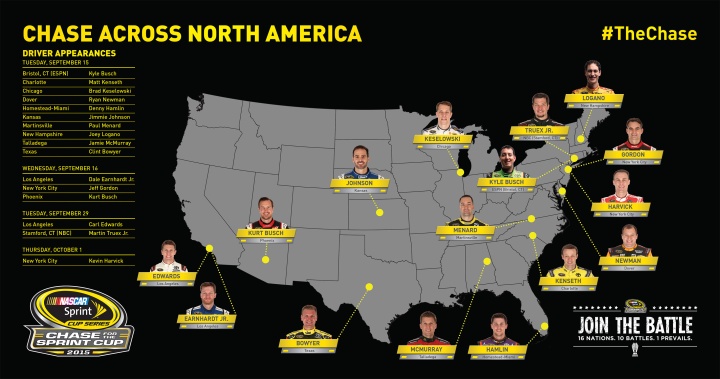 In the first-ever 1-2 finish in the series by the Busch brothers, Kyle Busch beat Kurt Busch to the finish line by .532 seconds to win for the first time since returning from an 11-race absence because of a broken right leg and left foot sustained in a Feb. 21 accident at Daytona International Speedway.

“First Busch brothers 1-2, boys,” Kyle Busch exulted on his radio after taking the checkered flag. “Mom and Dad should be proud.”

On Lap 106 of 110, Kyle Busch muscled Jimmie Johnson out of the way and took the lead on the way to his second victory at the 1.99-mile road course and the 30th of his career. Johnson had stayed out on old tires while Busch joined a parade to pit road for new rubber after the left rear wheel assembly separated from Casey Mears Chevrolet to cause the fifth and final caution of the race on Lap 99.

Johnson led the field to a restart on Lap 104, but the cars with fresh tires soon asserted their superiority, with Kurt Busch, Clint Bowyer, reigning series champion Kevin Harvick and Joey Logano all following Kyle Busch in putting the six-time champion behind them.

Kyle Busch restarted seventh and got past Bowyer, the eventual third-place finisher, soon thereafter in heavy traffic at the top of the hill in Turn 2. Two laps later, he passed Johnson for the lead.

All told, 46 races had passed since Kyle Busch last went to Victory Lane in NASCAR’s premier series, including the 11 he missed because of the Daytona injuries. Busch last won at Fontana, Calif., on Mar. 23, 2014. The victory extends his streak of winning at least one race per year to 11 years.

More significant, the triumph gives Busch the first element he needs to qualify for the Chase for the NASCAR Sprint Cup. Busch also must finish in the top 30 in the series standings after 26 races in order to maintain his eligibility for NASCAR’s playoff.

With the win, Busch gained two positions in the standings to 37th, 136 points behind 30th-place Cole Whit with 10 races left in the regular season.

“Yeah, we have our work cut out for us,” he said. “We knew we did in the beginning (after returning to competition five races ago), and I knew we put us in the hole in points. It’s unfortunate that we’ve had a couple crashes (in recent events at Dover and Michigan).

“As much as I can do, that’s what we’re going to do. Adam Stevens, this is his first win as a Cup crew chief, so this is pretty special. My wife is here, she flew in this morning. So it’s awesome to have her with us today. Brexton (Busch’s newborn son) is at home, though. He didn’t want to fly six hours, so we let him stay at home this time. This is so cool.”

Kurt Busch led a race-high 43 laps but spent too much time getting past Bowyer in the closing laps to have a realistic chance to catch his brother. But his disappointment at finishing second was trumped by empathy for the ordeal Kyle has endured this season.

“It was emotional,” Kurt Busch acknowledged. “I know he’s been through quite a bit; to have your leg broken, your foot shattered, to never (before) be injured and out of the car … I don’t know what that feels like, but I do know that working with Tony Stewart and having him go through rehab, rehab is very difficult, and it is a mental challenge.

Then Kurt’s competitive juices took over, and he added, tongue-in-cheek, “I just wish I could have one more lap to get to his bumper, but I think he didn’t want to see an extra lap.”