Kerry Murphey updates you on the Michigan race weekend, and we find out What is in Denny Hamlin’s house.

END_OF_DOCUMENT_TOKEN_TO_BE_REPLACED

SHOW #467 – Guest: Brennan Poole – We recap an exciting Pocono weekend (no seriously) Dale Jr. reveals all, NASCAR Heat Evolution 2 gets awesomer (new word), Danica attacks, Kurt loves Kurt, Brad staying with Penske?, a full Michigan preview, and what does N’Sync have to do with this show? Hosted by Kerry Murphey and Toby Christie

END_OF_DOCUMENT_TOKEN_TO_BE_REPLACED

Logano had to drive around Kevin Harvick’s car to reach his pit stall and parked it near the outer boundary. As Harvick exited his pit box, he ran over the hose attached to the air gun of the rear tire changer, sending the gun flying forward onto pit road.

The snafu cost Logano 10 positions. The driver of the No. 22 Team Penske Ford restarted 17th on Lap 192 and drove to 10th at the finish.

“We kind of ended on a down note there,” Logano said. “We came back down pit road there at the end to take four (tires), and somehow I guess the 4 car (Harvick) hooked our air gun and sent the rear air gun flying, and we lost time in the pits.

“We were the last car on the lead lap on that last run and got back to 10th so I’m proud of the effort this weekend. The pole was nice. We just weren’t as competitive as we were in the spring race. Our car drove the same—everyone just got better.”

On lap 58, Truex passed Kevin Harvick for the lead after advancing briskly from his 20th-place starting position. During a green-flag pit stop on Lap 65, however, the jack dropped before the rear tire changed had tightened the lug nuts, forcing Truex’s car to jack the car back up and finish the job.

In the process, the left rear quarter panel of Truex’s No. 78 Toyota was damaged, adversely affecting the aerodynamics of the car.

Truex finished a disappointing 20th in a car that could have contended for the victory.

“We were never the same after that pit stop,” Truex who has had a litany of difficulties on pit road this season. “We made a number of unscheduled stops to try to fix the problem, but the damage was just too severe to overcome.

“Let another strong performance slip away.”

When Larson subsequently took the checkered flag to win the first NASCAR Sprint Cup Series race of his career, the emotion was all but overwhelming—and for good reason.

The victory came in Larson’s 99th start in the series, long after most observers expected Larson to record his first win. It also broke a 99-race drought for Chip Ganassi Racing, dating to Jamie McMurray’s victory at Talladega in October 2013.

With the triumph, Larson earned a spot in the Chase for the NASCAR Sprint Cup for the first time in his career, moving winless Ryan Newman 15 points out of the last Chase-eligible position with two races left in the regular season.

With Brett Moffitt winning in the NASCAR Camping World Truck Series at Michigan and Michael McDowell prevailing in the NASCAR XFINITY Series at Road America in Elkhart Lake, Wis.—both on Saturday—Larson’s triumph capped the first weekend in NASCAR history that produced first-time winners in all three national series.

It also marked the first time a graduate of the NASCAR Drive for Diversity and NASCAR Next programs has reached Victory Lane in the NASCAR Sprint Cup Series.

The emotions of the moment, however, were magnified by the recent death at age 27 of Bryan Clauson, who was fatally injured in a midget car accident on Aug. 6 in Belleville, Kan. Larson came to NASCAR from open-wheel racing, and he and Clauson were close friends.

“Parked it!” yelled Larson after he took the checkered flag, echoing Clauson’s signature victory cry. The driver of the No. 42 Chevrolet followed with a celebratory burnout that left a trail of rubber across Victory Lane.

Larson then exited his car, took the checkered flag from the flag man and leapt into the arms of his fueler, who had run out into the infield to congratulate his driver.

“I was teared-up that whole last few laps, because I could just feel it,” Larson said. “It was finally going to be it. This one is for the Clauson family. We really miss Bryan. We’re going to miss him. We parked it for him, so that’s really cool.

“We had a lot of work to do for that first third of the race, and got it done. Thanks to (sponsor) Target. Thanks to everyone on this team. (Crew chief) Chad (Johnston) and the pit crew and everybody. We messed up that last stop but we made it back.”

In fact, Larson lost the lead to race runner-up Chase Elliott when both drivers made their final pit stops under green on Lap 156 of 200. Elliott beat Larson out of the pits by a half car-length and began to pull away. But a caution on Lap 187 because of Michael Annett’s blown right front tire gave Larson the chance he needed.

With a hard push from third-place finisher Brad Keselowski, Larson took the lead on the final restart on Lap 192, as Elliott spun his tires and lost momentum in the outside lane. Larson crossed the finish line with a 1.478-second advantage over Elliott, who passed Keselowski for the second spot on Lap 193.

Still seeking his first victory in his rookie season, Elliott had an opportunity to win at Michigan in June but likewise fell victim to a late restart.

“Bummer again here,” said Elliott, making no attempt to hide his disappointment. “I hate to let my guys down is the biggest thing. For the second time, this has happened. I made a mistake early on in the race. I asked my guys to bail me out (on the final pit stop), and they did. Unfortunately, I didn’t do my part again.

“That’s a couple races in a row in just a few short months here at this place we had a really good car, had an opportunity. That’s one thing I try really hard to do is make the most of opportunities when they’re presented. Obviously I didn’t do a very good job of that here both trips. Need to do my restarts a little better. That’s obviously not a strong point, at least here at Michigan.”

The second-place finish, however, solidified Elliott’s position relative to the Chase. He’s currently 11th in the standings, highest among drivers without a victory and 27 points ahead of Newman, who finished 17th on Sunday.

Notes: Tony Stewart clinched a position in the top 30 in the standings and therefore a berth in the Chase with his 21st-place finish. … Pocono winner Chris Buescher lost a cylinder at the outset, finished 35th, and held onto a seven-point lead over David Ragan for the 30th spot in the standings. Buescher must remain in the top 30 after the next two races to parlay his Pocono victory into a Chase berth. 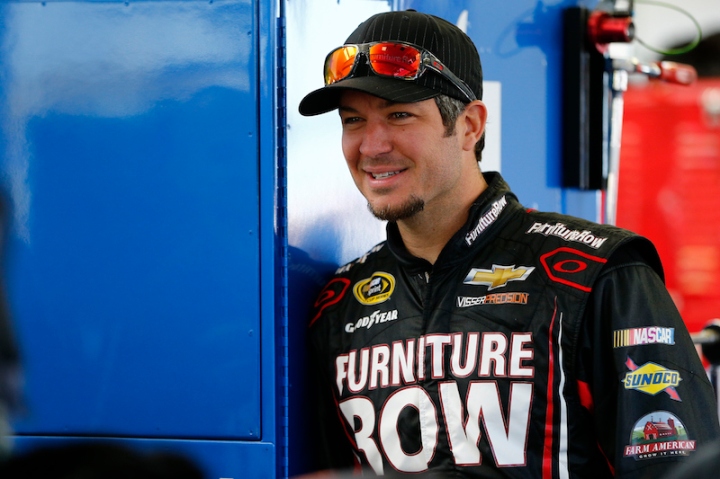 SHOW #425 – Guest: Martin Truex Jr. – We recap the rainy Bristol weekend, goo on other race tracks, latest from Dale Earnhardt Jr., testing at Chicagoland, Byron lands sweet gig, Sadler keeps his, Kyle Busch gets a time out in the corner, plus a full Michigan preview. Hosted by Kerry Murphey and Toby Christie