END_OF_DOCUMENT_TOKEN_TO_BE_REPLACED

SHOW #248 – Guests: Parker Kligerman, Trevor Bayne – We find out what the drivers did during the off weekend, who’s gonna drive the 11 car and when, fantasy nascar, plus a Martinsville preview. Hosted by Kerry Murphey and Toby (I got no rhythm) Christie.

END_OF_DOCUMENT_TOKEN_TO_BE_REPLACED 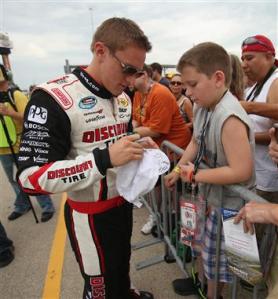 KBM CONTINUES YOUTH MOVEMENT
WITH ADDITION OF KLIGERMAN
MOORESVILLE, N.C. (Dec. 18, 2012)- Kyle Busch Motorsports (KBM) announced today that the team has signed 22-year-old Parker Kligerman to compete for the 2013 NASCAR Nationwide Series driver’s championship. Kligerman will pilot the No. 77 Toyota Camry for the entirety of the 33-race schedule.

Kligerman comes to KBM’s Nationwide Series program on the heels of a breakout season in 2012. In his second full-time Camping World Truck Series campaign, the talented youngster earned his first career NASCAR victory at Talladega (Ala.) Superspeedway in October, captured two pole awards and collected eight top-five and 15 top-10 finishes en route to a fifth-place finish in the final Truck Series driver’s point standings. His Talladega victory, both poles and five of his eight top-five finishes came after joining the Toyota Racing family at the halfway point of the season.

The Connecticut native has registered five top-10 finishes in 18 career Nationwide Series starts. He posted two top-10 finishes in three starts this season, including a career-best seventh-place finish in the July race at Chicagoland Speedway in Joliet, Ill.

In October of 2009, at the age of 19, Kligerman captured the pole in his first-ever Nationwide Series start at Kansas Speedway in Kansas City, becoming the 10th driver in series history to accomplish the feat. That same year, he earned the 2009 Rookie of the Year award in the ARCA Racing Series after winning a series-high nine races and finishing second in the final point standings.

“When you think of Kyle Busch and Kyle Busch Motorsports, you think of an owner and a team that have established a tradition of winning and pride themselves on it, so I feel honored to be given the chance to come in and continue in that tradition,” Kligerman said. “I feel that running full-time in the Truck Series the last two seasons and coming close to a championship last season has prepared me to be able to do the same in the Nationwide Series next year. With the personnel that KBM has in place and what they were able to accomplish in their first year in the Nationwide Series combined with all the support they have from Toyota and TRD (Toyota Racing Development), I see no reason why we can’t compete for wins on a weekly basis and be a top-five team in the final point standings at the end of the season.”

“Once Parker got behind the wheel of a Toyota halfway through the season, he proved that he was capable of running up front week in and week out in the Truck Series and comes to us with a lot of confidence,” owner Kyle Busch said. “Since I started my Truck Series team in 2010, I’ve wanted the focus of our efforts to be on developing young talent and being able to create an identity for KBM without having to be behind the wheel myself. With the addition of Parker to our Nationwide Series program and Joey Coulter to our Truck Series program, we now have two of the sport’s most talented young drivers in our building.”

“Everyone at Toyota and TRD speaks very highly of Parker and they were a big part of why were able to bring him onboard here at KBM,” KBM General Manager Rick Ren said. “Although he has only driven a handful of races with these new Nationwide Series cars, he has participated in a lot of testing the last few years and we feel like he will be able to come in and be able to use that knowledge to help us to continue to make improvements to our program.”

“Our Nationwide Series program really seemed to hit its stride the last 10 races of the season — won a couple of poles, led a bunch of laps and were in contention for the win almost every week,” said Busch, who was behind the wheel for eight of the final 10 races. “We feel like we’ll be able to carry that momentum into next year and come out of the gates stronger than we did in our first season.”

Further details regarding sponsorship for Kligerman’s No. 77 Camry will be announced at a later date.

Parker Kligerman will drive the No. 22 Discount Tire Dodge this weekend in the NASCAR Nationwide Series race at Bristol Motor Speedway. Brad Keselowski is still healing from an ankle fracture and strained back suffered in his testing accident at Road Atlanta earlier this month. Brad’s condition will continue to be monitored on a race-by-race basis.