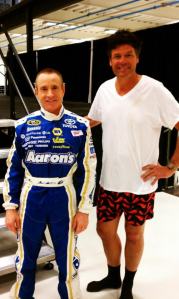 WALTRIP TO DRIVE NO. 40 AARON’S DREAM MACHINE TOYOTA
FOR HILLMAN RACING IN 2012 DAYTONA 500

The race will mark Waltrip’s 75th start at Daytona in one of NASCAR’s top three touring series (Sprint Cup, Nationwide and Camping World trucks) – the most of any driver.

“Aaron’s really does make your dreams come true,” said Waltrip. “When I was a kid thinking about racing in Daytona I never dreamed I would start more NASCAR races there than anyone. That’s amazing.”

He said it takes many factors for success.

“You have to have a great sponsor to race and Aaron’s has been a great sponsor for a long time.” Waltrip said. “I appreciate what the folks at Hillman Racing including Joe Falk are putting together. Hopefully my experience at Daytona will help them get out of the gate strong with their new team.”

Daytona’s 2012 Speedweeks promises to be busy for Waltrip. He’ll race the No. 55 Aaron’s Dream Machine Toyota in the Feb. 18 Budweiser Shootout, oversee his three Sprint Cup teams at Michael Waltrip Racing and host several top executives from corporate America attending the races with the team. Waltrip will also continue his television work serving as a commentator for SPEED-TV’s truck series broadcasts and begin his new role as an analyst for the Fox NASCAR Sunday broadcasts joining his brother and Hall of Fame member Darrell Waltrip.

Aaron’s Chief Operating Officer Ken Butler said the chance to have Waltrip drive the No. 40 and Mark Martin drive MWR’s No. 55 Aaron’s Dream Machines in the Daytona 500 is too good of an opportunity to miss.

“We could not be more pleased to work out a deal to sponsor Michael for his 26th consecutive start in the Daytona 500,” said Butler. “There isn’t a better way to introduce our 2012 Dream Machine program than having both Mark Martin and Michael competing together in NASCAR’s biggest race. I look forward to watching Michael and Mark bringing our Dream Machines to the checkers side by side in the first and second spots.”

Hillman Racing is making its NASCAR debut this season, but the organization is anything but new to the sport. Team owner Mike Hillman Sr. played a key role in the founding of Germain Racing and was the architect of the group’s two NASCAR championships in 2006 and 2010. Hillman acquired the championship-winning NASCAR Camping World Truck Series assets following the conclusion of the 2011 season and is set to embark as the owner and general manager of Hillman Racing for the 2012 season.

“I can’t think of a better way to start off the season than to have Michael Waltrip behind the wheel of our car at Daytona,” said Hillman, who credits longtime friend and co-owner Joe Falk for the inclusion of the Cup program under the Hillman Racing banner. “I’ve been in this sport a long time, but I’ve never been so excited to go to Daytona. To have two Daytona 500 champions at the start of the season – with Ward Burton in the truck and Michael in the Cup car – positions Hillman Racing for a strong debut and a chance to win both races.”

Waltrip made the first of his 25 consecutive Daytona 500 starts in 1987. He and Darrell are the only brother combination to win the Daytona 500. Michael’s 2001 and 2003 victories made him one of only eight drivers with multiple wins in “The Great American Race.” The 2012 Daytona 500 marks Waltrip’s 767th Sprint Cup start and 1,054th NASCAR start. Waltrip, Richard Petty and Mark Martin are the only drivers with more than 1,000 starts in the sport’s three top touring series.
Waltrip won last year’s Daytona truck race on a dramatic last-lap pass. The victory came on the 10th anniversary of his first Daytona 500 victory.