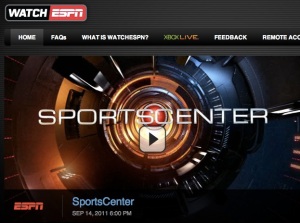 Johnson will join regular anchors John Anderson and Lindsay Czarniak for the 6 p.m. ET show on Tuesday, Nov. 19 on ESPN.

The aforementioned actors Crystal and Jeong are the only other celebrity guest hosts of SportsCenter in the show’s 34-year history. Crystal was the first in 2012 and Jeong guest hosted earlier this month on Nov. 1.

Johnson, who wrapped up his sixth NASCAR Sprint Cup Series title in 12 full seasons this past Sunday, has appeared on SportsCenter numerous times during his racing career both in-studio and via satellite, but always as a newsmaker. He also appeared in a humorous and memorable “This Is SportsCenter” commercial in which he used a pickaxe to remove speed bumps in the ESPN parking lot.

But this time the driver of the Hendrick Motorsports No. 48 Lowe’s Chevrolet will perform all of the duties of a SportsCenter host, including presenting news and highlights and conducting interviews from around the world of sports. And just like SportsCenter veterans Scott and Berman, and every other anchor who has sat behind the desk, Johnson will spend the day Tuesday preparing for his guest hosting responsibilities.

“I don’t know if SportsCenter knows what they are getting themselves into,” Johnson joked. “It’s probably a good thing I’m there pretty much all day preparing. I’ve got some tough shoes to fill with Billy Crystal and Ken Jeong but I’ve met most of the anchors and I am really looking forward to becoming the first athlete to ever guest host SportsCenter.”

Since its debut on ESPN’s launch day of Sept. 7, 1979, SportsCenter has aired more episodes than any television show in U.S. history, reaching the 50,000-episode mark in 2012.

“We’re always looking for opportunities to change it up and give SportsCenter viewers a different take on the day’s news, have some fun and do some memorable television,” said Jack Obringer, SportsCenter senior coordinating producer. “And having a six-time champion like Jimmie Johnson on your set is pretty cool.”

Fans are encouraged to join in on the conversation using the hashtag #JimmieOnSC.

In addition to his SportsCenter guest-hosting duties, Johnson will also appear on Late Show with David Letterman tonight and LIVE with Kelly and Michael tomorrow morning to talk about winning his sixth NASCAR Sprint Cup Series title.