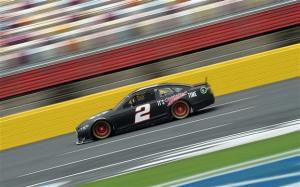 LAS VEGAS — Travel included, the time gap between standing on the stage at Wynn Las Vegas and sitting behind the wheel of a car at Charlotte Motor Speedway will amount to less than 60 hours.

The test follows an initial gathering of data in October, also at Charlotte.

“We had the test in October, we had six cars, and we learned quite a bit,” said Gene Stefanyshyn, NASCAR vice president of innovation and racing development. “We were generally looking at aerodynamic and chassis changes. I think we’ve got some very good insight, and now we’ve determined that we’ve got to bring a bigger pool of cars together.

“We think right now we’re going to have about 25 cars participate, so we’ll have a bigger field to validate some of the changes we’re anticipating for 2014.”

As Stefanyshyn said, most of the changes will deal with aero packages, but NASCAR also will test tapered spacers on the NASCAR Sprint Cup cars to measure the effects of reduced horsepower. The NASCAR Nationwide Series and NASCAR Camping World Truck Series both use tapered spacers as part of their engine packages.

NASCAR has reviewed potential configurations and provided test plans to the teams, including detailed CAD drawings of parts that needed to be created or fabricated.

“Some of those we will provide,” Stefanyshyn said. “Some they will fabricate.”

During the eight-hour test, NASCAR plans to run four different configurations in an attempt to arrive at a 2014 package that will reduce the aerodynamic disadvantage of trailing cars.

“It’s interesting,” Kyle Busch said after Thursday’s NASCAR NMPA Myers Brothers Awards Luncheon at Wynn Las Vegas. “When you get out front, you haul the mail. But then, when you get back in eighth, 10th, 12th, 15th, you’re wrecking sideways, whatever it may be, but you’re stuck.”

Friday night’s NASCAR Sprint Cup Series Awards was jam-packed with presentations but only one was a surprise — the presentation of the Third Annual Betty Jane France Humanitarian Award to Don Post of Kansas City, Mo.

The award showcases The NASCAR Foundation, which was created in 2006 with the mission to raise funds and increase volunteerism to support charitable causes throughout the nation … with special emphasis on positively impacting the lives of children.

In 2011, the Betty Jane France Humanitarian Award was created. The award honors the longtime commitment to community service and charitable causes by the foundation’s founder, Betty Jane France, who presented the award to Post.

The award goes annually to a NASCAR fan who embodies those ideals.

By any measure, Post fits the mold. He was diagnosed with ALS, “Lou Gehrig’s Disease,” in 1980 and was told he had three to five years to live. Undaunted, he embarked on a 33-year mission of donating his time and talent to charities in the Kansas City area.

Post has rallied the Kansas City community through the March of Dimes. His leadership on the “Bikers for Babies” motorcycle ride has helped raise $6.8 million toward finding causes and cures for premature birth, infant mortality and neuromuscular diseases.

An online http://www.NASCAR.com vote to determine this year’s award winner resulted in nearly 200,000 votes being cast, a record number.

The charities supported by the finalists will each receive a 25 thousand dollar donation from The NASCAR Foundation.

Post will receive a new Chevrolet SS, courtesy of Chevrolet, and provide the March of Dimes with a $100,000 donation.

THE SPRING’S THE THING

One answer to the issue Busch raised could come in the form of the removal of pre-race and post-race ride-height requirements.

With the current front suspension package, teams use lightweight springs made of special steel that doesn’t fatigue. Each spring can cost as much as $2,000.

“The purpose of the spring is essentially to get the car back to inspection height,” Stefanyshyn said. “But it’s really not a suspension spring. So essentially, today, the cars are riding around on the bump stops. So they’re running around on a very hard material.

“So if we put this spring in (after ride-height requirements are waived), which is a higher rate than the current spring we have, some of them will have the ability to ride on the spring instead of the bump stop. With that, what should happen is we should have more control in the car, and we’ll put less forces into the car, which should give a lot of drivers more stability and more confidence in driving the car.”

In theory, a more comfortable platform will allow drivers to race more aggressively. Hence, more passing. The change also will allow teams to use springs that cost $300-$400, though the exact same configuration used this season will continue to be allowed, if an organization so chooses.