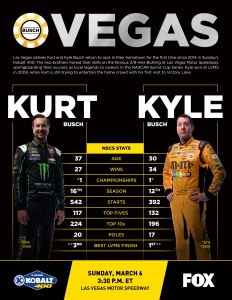 The Busch brothers grew up starring at LVMS’ Bullring before moving on to NASCAR’s regional touring series.

Kyle won at Las Vegas in 2009, but Kurt is still looking to wave the checkered flag in front of the home crowd. His best Vegas finish was a third-place showing in 2005.

Although Kyle only has one win at his home track, his loop statistics there are excellent. Among active drivers at LVMS, he has the top average running position (11.7) and the second-best driver rating (103.4).