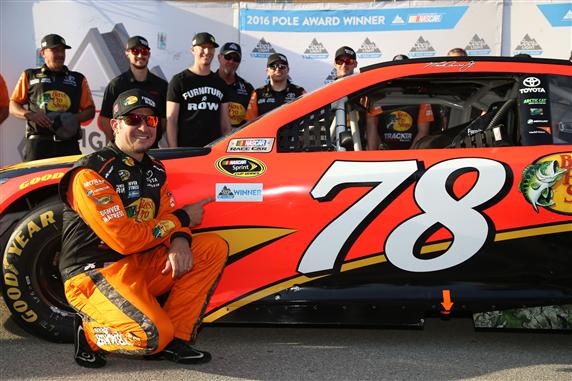 KANSAS CITY, Kan. – Martin Truex Jr. freely admitted it took time for the No. 78 Furniture Row team to get the hang of three-round knockout qualifying.

From the look of Friday’s time trials at Kansas Speedway, however, the problem appears to be solved.

The Coors Light Pole Award was the eighth of Truex’s career and his first since April 2012 at Texas, a string of 147 races.

“It kind of took us a while to figure out this three-round deal,” said Truex, who edged fellow Toyota driver Matt Kenseth (190.564 mph) for the top starting spot by .053 seconds.

“It feels good to get another pole. It’s been a long time. We’ve been really close with our Furniture Row team the past two years—we qualified second a handful of times—and we’ve been right there at it. We’ve led the first round, we’ve led the second round. We just haven’t quite figured out how to lead that third round …

“Hopefully we’ll be able to finish the deal (Saturday) night.”

Kenseth was fastest in each of the first two knockout rounds but came up short when the pole was decided.

“All of our Toyotas had a lot of speed in ’em,” said Kenseth, who led all three of his Joe Gibbs Racing teammates into the final 12. “I just couldn’t quite get that last lap that I wanted.

“We had a lot of speed, but we just got a little off our balance there at the end, and Martin was able to get it.”

It was an off day for the Hendrick Motorsports contingent. Sunoco Rookie of the Year leader Chase Elliott qualified 13th, missing the cutoff for the final 12 by .086 seconds. Jimmie Johnson, who overcame engine problems earlier in the day, will start 15th, with Dale Earnhardt Jr. 22nd and Kasey Kahne 27th.

Like Kahne, Kevin Harvick was bumped out of the top 24 in the opening round and will take the green flag in 26th position.

Kurt Busch, the top qualifying Chevrolet driver, confessed to overdriving Turn 3 during his final run but was optimistic because of positive adjustments made to his car between rounds.

“Yeah, I feel good because we made three spring changes going into that qualifying run,” Busch said. “Those are things we wanted to try for the race, and we ran out of practice time to do so. It’s nice that it turned out positive and the pace in qualifying is fast, yes, but the race will be at nightfall whereas we practiced in the daytime.

“This speed should be right in the middle of what we just ran and what changes we made. I think we’re cooking up the right batch (for the race).”