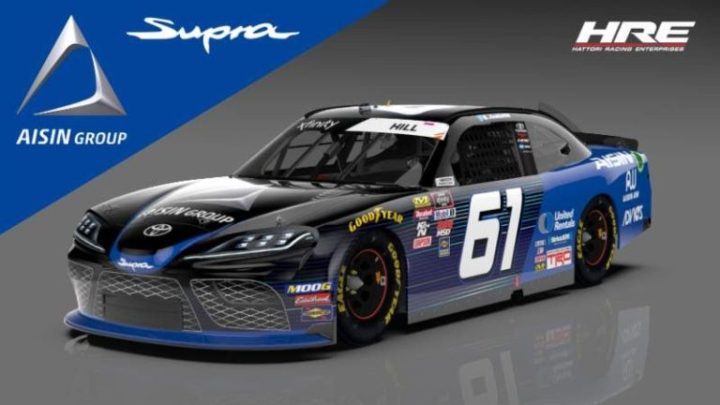 In a story that was broken by TobyChristie.com at the end of May, it was revealed that Hattori Racing Enterprises would be making a return to NASCAR Xfinity Series competition using the No. 61 Toyota Supra at Daytona in July. Now, a month later we have official confirmation from the team, and we now know that Austin Hill will officially make his Series debut.

Hill won the season-opening NASCAR Gander Outdoors Truck Series event at Daytona International Speedway, so obviously he is giddy to get behind the wheel for the team next week.

“You always want to move up the ladder, and I can’t wait to get in the car,” Hill said in a team press release. “I honestly never thought I’d have this opportunity. All thanks goes to [Team Owner] Shige [Hattori] and AISIN Group. They’ve been working on this for a while and it’s a big deal for all of us to put a program together to race the Supra. We have a great team here, and it’s going to make the transition a lot smoother working with Scott and the entire truck series team. We set the bar pretty high for ourselves at Daytona, so hopefully we can have the same success as we did in February.”

Hattori Racing Enterprises has made nine previous starts in the NASCAR Xfinity Series, the best finish the team has recorded to date was a 10th-place effort with Ross Chastain behind the wheel at Kentucky in 2014. According to the press release from the organization, the team is looking to run more Xfinity Series events in 2019 after Daytona.

“We’re very excited to return to the Xfinity Series,” Hattori said in the release. “The Toyota Supra is extremely important to our partners and very popular in Japan and we want to be part of the Supra program in NASCAR. It’s exciting for our team to compete in the Xfinity Series at Daytona, especially after winning there earlier this year. Austin has done a good job in the truck so far and this will be good to get him more experience.”