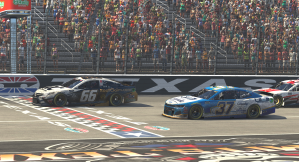 Byron, who drives the famed No. 24 Chevrolet for Hendrick Motorsports, led a dominating 80 laps but Hill’s move with three laps of regulation was good enough to flush Byron back into the pack. A caution came out and Hill then had to hold off fellow iRacing regulars Preece and Smithley on a green-white-checkered restart. Byron ended up seventh.

It was the 27-year old Maryland native’s 674th iRacing victory, but Hill acknowledged it was among the most important of his career.

“I couldn’t be more excited,” Hill said “Very exciting times for us because we just don’t get the recognition on a normal basis. To be on an even playing field is excellent. To be on this platform, the Cup platform, is exciting. The amount of folks that reached out to me has just been tremendous.

“The last lap was just one I will definitely remember for a while.”

Hill said he had already participated in his usual victory celebration – his wife gave him a hug and big glass of milk to drink.

“Downed that right away and hugged her,” he said.

“I had quite a bit of friends that were in my channel throughout the race that were spotting me, crew chiefing me throughout the race. I kind of got to chat with them. I am not surrounded by all my loved ones right now because everybody is trying to be safe. But I got a lot of phone calls, messages. I feel like the hero today.”

Although Hill, who has 1,677 iRacing starts, essentially paces the field in iRacing virtual experience, in the real world, he competes for a smaller, low-budget team. He qualified for his first NASCAR Cup Series Daytona 500 only this February driving the No. 66 for Motorsports Business Management and finished 27th – his best showing in the four races NASCAR held before putting the regular season on hold as the world deals with the COVID-19 pandemic.

The opportunity to continue to compete – albeit virtually – against many of the same NASCAR Cup Series drivers – plus a group of drivers from other NASCAR series that qualified for Sunday’s race – has been a significant achievement for Hill – a sort of virtual victory for the real life underdog.

For example, Hill is competing in the eNASCAR iRacing Pro Invitational Series with a 12-year old steering wheel attached to a desk with only a single viewing monitor to conduct his race – a stark difference from last week’s inaugural eNASCAR iRacing Pro Invitational winner, Denny Hamlin who estimates he spent nearly $40,000 on his elaborate simulator set-up which is high-end all the way – from its high tech race seat to the three monitors and pedal system.

Hill, on the other hand, estimates his wheel cost him $300, it’s mounted to a $75 desk he got at a local office store. He sits in a $100 chair coordinating his race on a gaming computer that cost him about $1,400 by his estimate. But, he noted, it’s his primary laptop computer and he doesn’t just use it for iRacing but for everything – from running his NASCAR Gander RV & Outdoors Series team to filling out a personal tax return.

“For me personally the iRacing platform, it’s kind of an equalizer in effect that the cars that we’re driving on there, I’m in the same cars as everybody,” Hill explained. “Most weekends, I’m not in that situation. I’m in a situation where I’m racing on 15 lap tires, have a motor that’s 200 horsepower down, got a car that’s probably five years old. I’m really kind of behind the eight ball as soon as we show up at the racetrack at times.

“To come into the server where everybody has the same cars, in this case even the same setup, everybody is on the same exact playing field, basically the driver conquers all in this situation.

“I had more experience coming into it because I’ve been on the service quite a bit longer. I knew that would be to my advantage. At the end of the day, these guys are all competitors, they’re all turning hundreds of laps. They’re all doing the best they can.

“For me to actually beat these guys on a level playing field, it really feels good for my driving talents. I look forward to the competition as it gets better in the coming weeks.

Certainly this second week of competition featured an even more robust level of performance – from fewer multi-car incidents, to fantastic racing up front. Byron, who famously helped earn his NASCAR opportunities through his excellence in iRacing won the pole position and showed the way for much of the race, which featured 10 leaders and 16 lead changes.

“Led most laps, got moved out of the way. We’ll get him back next time! Thanks,” Byron said of his afternoon on Twitter following the race.

Hill acknowledged that Byron may not have been too thrilled with the “bump-and-run” pass for the win, but that it was his only opportunity for victory – something he hoped the 22-year old Byron would understand in the coming days.

“I think the etiquette is similar to real life; basically you race people how they race you,” Hill said of the Byron incident at the end of the race.

“In this situation, we’ve never really raced each other. In real life we’re on two completely different levels of competition. So this is a unique situation where we were kind of competing for the win in the closing laps. I think that kind of changes the element and style of racing. For me it was a situation where I don’t get the chance to win much on this big of a platform. I told myself, If I have a chance to win any race, NASCAR, short track level, if it came down to it, that’s what I would do. It doesn’t change because it was iRacing. That’s what I would do in real life.

“Going forward, I’m sure William isn’t happy about it. I’m sure he’ll do the same back to me. Reverting back to what I said before, you race others how they race you. I’ll probably get a lot of abuse going forward. I’ll have to accept that. But that’s in the future. I’m kind of living in the present and happy to get the win.”

The win – on a nationally-televised NASCAR event – could be a game-changer for Hill; possibly attracting more sponsorship to either the Gander Truck team he owns or perhaps his NASCAR Cup Series car. The implications go beyond the virtual dashboard.

“For me personally, I’ve been in this sport for 10 years, don’t get talked about much. I feel like I can get the job done given an opportunity. I’m trying to showcase that as many times as I can.

“I really feel that I can drive at a high-level in tough equipment given that opportunity,” Hill continued. “I don’t know if that will come from this, but you never know. I kind of hold hope for that. We’ll kind of see.”

One thing for sure, Hill will receive an iconic memento of his work.

As he was completing the winner’s press conference via conference call after the event, Texas Motor Speedway President Eddie Gossage offered a real – not virtual – winner’s cowboy hat – the traditional celebration in the Fort Worth Victory Lane.

“Excellent,” Hill said, when informed of the news.

It was indeed an excellent day for Hill.