During a morning press conference at its Kannapolis, N.C., race shop, Stewart-Haas Racing announced Aric Almirola as the driver of the No. 10 Smithfield Ford in 2018. END_OF_DOCUMENT_TOKEN_TO_BE_REPLACED

A decade has passed since Toyota made its first foray into one of NASCAR’s top three national series. The automaker entered NASCAR Camping World Truck Series competition in 2004 and began its participation in both the NASCAR Sprint Cup and NASCAR Nationwide Series in 2007. END_OF_DOCUMENT_TOKEN_TO_BE_REPLACED

Danica Patrick’s night ends early after getting hit by the No. 78. 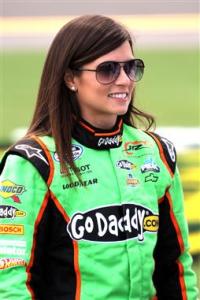 Patrick, driver of the No. 10 GoDaddy.com Chevrolet for Tommy Baldwin Racing via a collaborative agreement with Stewart-Haas Racing (SHR), will benefit from an extra day of practice, scheduled for the Thursday before the race weekend due to the 1.5-mile oval being resurfaced since the Sprint Cup Series’ last visit to Kansas in April.

“With the testing rules the way they are, we can’t test with her at tracks where NASCAR’s top three series compete,” said Greg Zipadelli, SHR competition director and race strategist for Patrick. “That extra day of testing will be huge for her. With the amount of 1.5-mile ovals on the schedule, it made sense to have her compete at Kansas to better prepare her for 2013.”

END_OF_DOCUMENT_TOKEN_TO_BE_REPLACED 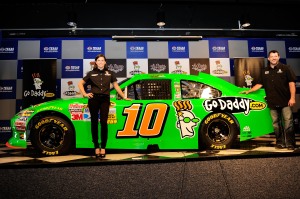 FORT WORTH, Texas (Nov. 4, 2011) – The wait is over. Go Daddy Girl Danica Patrick’s limited NASCAR Sprint Cup Series schedule for Stewart-Haas Racing (SHR) is known, as is the car number that will adorn her GoDaddy.com Chevrolet Impala.