During a morning press conference at its Kannapolis, N.C., race shop, Stewart-Haas Racing announced Aric Almirola as the driver of the No. 10 Smithfield Ford in 2018. 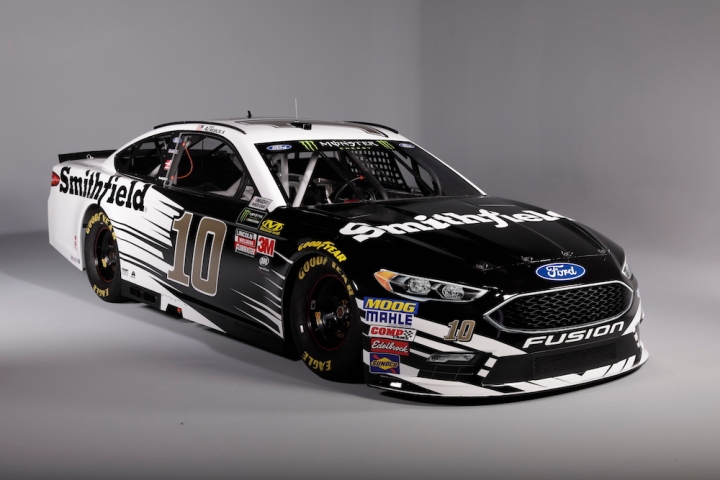 Almirola, who currently drives the No. 43 for Richard Petty Motorsports, takes over a ride that has been piloted by Danica Patrick for each of the last five full seasons.

“I’ve known Aric since 2004 and have always been impressed with him on the racetrack,” said Tony Stewart, co-owner of Stewart-Haas Racing with Haas Automation founder Gene Haas. “I’ve raced with him and seen him mature into a really good racecar driver. He can compete for wins here at Stewart-Haas Racing and help our other drivers compete for wins. He’s an excellent fit for this team and for Smithfield.”
Last month, Richard Petty Motorsports announced Darrell Wallace Jr. as the driver of its No. 43 car in 2018, leaving Almirola in limbo for next season — at least publicly. There were widespread rumors of Almirola’s move to SHR, and those whispers were confirmed this morning as the team unveiled the new black-white-and-gold No. 10 that will race in the Monster Energy NASCAR Cup Series next season.

“This is the opportunity every racer wants,” Almirola said. “Stewart-Haas Racing is an experienced organization with a lot of depth, great technical support from Ford, and staffed with racers from top to bottom. They lean on each other, challenge each other and make each other better. I’m really looking forward to being a part of that.”

The 33-year-old Tampa native brings a wealth of experience to SHR. He has driven in the Monster Energy Series since 2007, and has won at least one race in all three of NASCAR’s national series (the Monster Energy Series, NASCAR XFINITY Series and NASCAR Camping World Truck Series). He also brings a longstanding relationship with Smithfield, who has sponsored the cars he has driven since 2012.
“This is a great moment for Aric, and Smithfield is very happy to be a part of it because it’s a great opportunity for our company,” said John Pauley, executive vice president of sales and marketing, Smithfield. “Obviously, we strongly believe in Aric’s ability and that of Stewart-Haas Racing, and those abilities transcend the racetrack. They want to consistently run up front and contend for wins, but they’re also very interested in helping us win in the marketplace. This is a strong partnership with outgoing personalities who are driven to succeed.”