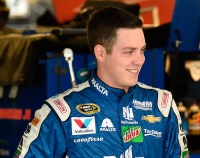 DAYTONA BEACH, Fla. – A new Camaro to drive, a house party to bring in the dawn and hundreds of congratulatory messages to answer on social media – including one from PGA legend Jack Nicklaus. It’s been a good week for first time Monster Energy NASCAR Cup Series race winner Alex Bowman.

Smiles, a full heart and a checked box.

Bowman’s team owner, NASCAR Hall of Famer Rick Hendrick gave the Chicago race winner a helicopter ride to pick up his new Chevrolet Camaro in North Carolina earlier this week – a highlight for Bowman, who joked that the price of the helicopter hitchhike may well have been included in the cost of the new car from NASCAR Hall of Famer Jeff Gordon’s dealership. But it was all worth it in one of the most special weeks of Bowman’s young career – a time of celebration and also of reassurance that Bowman can definitely win in NASCAR’s big leagues.

“It’s probably been a little different than I thought it would be,” Bowman, 26, conceded of his celebratory week. “It was just a really short week and a lot of obligations that come along with it. But it’s been a lot of fun. It was fun to get home Sunday night and share it with my friends. The whole race team stopped by on their way home from the airport, so that was really cool.

“I feel like it’s a big relief and now I just want to go win a bunch more. You always have that question in the back of your head: “What if I never win a Cup race?” You start thinking about all the drivers that have driven for Hendrick Motorsports that haven’t won a Cup race in their career. I don’t know if anyone has ever done that, but it feels really good to have that off my back. Now we can focus on just winning more.”

Winning more begins immediately with Saturday night’s Coke Zero Sugar 400 at Daytona International Speedway (7:30 p.m. ET on NBC, MRN and SiriusXM NASCAR Radio) and Bowman has reason to feel good about his chances. He finished 11th in the season-opening Daytona 500 and was runner-up at the other superspeedway in Talladega, Ala. in April.

That Talladega finish started a three-race streak of runner-up finishes, at last bettered Sunday night with a hard-earned victory over Kyle Larson in Chicago. Bowman recognizes the uptick in his driving and his No. 88 Hendrick Motorsports team performance. Far from swiping his spirit, the multiple near-misses only confirmed his genuine belief that he could be a winner at NASCAR’s highest level.

“Other than that, we’ve been really solid everywhere. It’s been a lot of fun to just be able to be a little more consistent than we’ve been and have really fast race cars each and every week.”

The result is not just Bowman’s confidence in this team and vice versa. It’s a bona fide mental shift for his competitors and for new fans – many who initially backed Bowman primarily because he took over the No. 88 formerly driven by the sport’s Most Popular Driver, Dale Earnhardt Jr.

Bowman proved that in the right equipment, he can better the best. He showed that he can make the most of an opportunity. Sunday night Larson took the lead from Bowman with seven laps remaining. And instead of Bowman feeling any oh-too-familiar satisfaction in the consolation runner-up prize, instead he went back after Larson, passing him for the victory with five laps remining.

The waning laps and how they played out was symbolic of Bowman’s passion. And they confirmed to all that he wants to win – that he isn’t just grateful for this chance to race, but ready to capitalize on it.

“So I was going to crash the thing or win. It was as simple as that.”