Back in May, The Final Lap broke the news that Monster Energy NASCAR Cup Series team BK Racing had been issued a tax lien of nearly $500,000. At the time, car owner Ron Devine shrugged off the tax lien as a non-issue and that he would have things resolved in short order. Now it appears just a couple of months later, the team has found more financial trouble. The Final Lap has learned through an official document from a man named Vince, who is a business partner to Ron Ingalls, BK Racing has defaulted on a $2-million promissory note.

Here is the official Notice of Default for BK Racing LLC.: 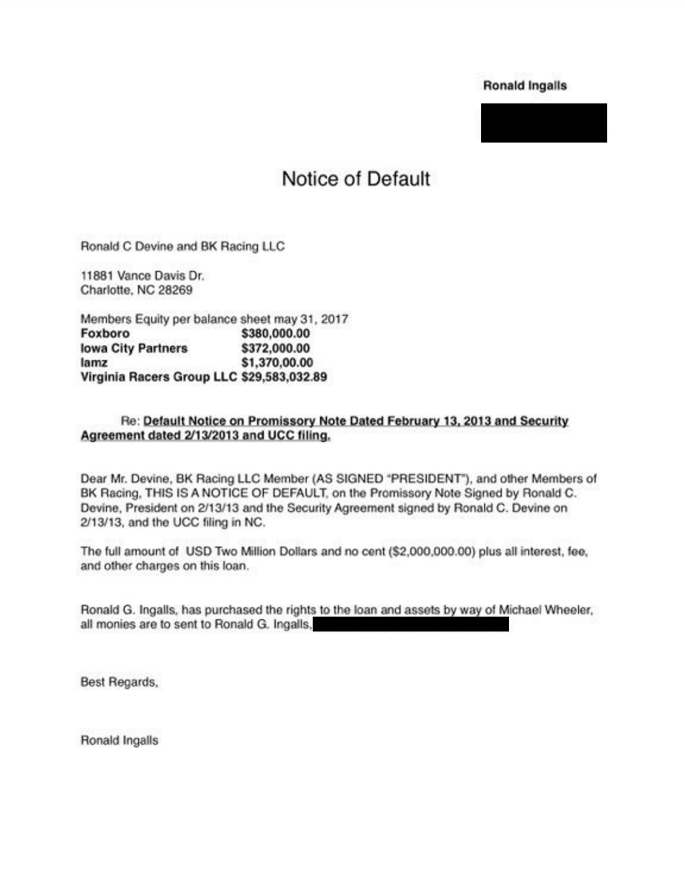 According to our source, who has inside knowledge of the default, Devine has never once made a payment on the assets he acquired from the now defunct Red Bull Racing Team six years ago. Devine, according to the source had borrowed from and had an agreement to pay back roughly $2 million to one of his former minority BK Racing team owners, Michael Wheeler.

Wheeler, who no longer wanted a part of the racing business, got tired of waiting for payment to come from Devine so he sold the debt to another party.

“We bought the promissory note from Mr. Wheeler. We are looking at moving forward to do something to close [BK Racing] down. We own all of the Red Bull Stuff that has been acquired that he’s been using. And right now, the assets — whatever assets that were used or set aside or had to be replaced we owned. I’m sure we own 99-percent of the stuff that is [in their shop],” Said Vince.

30-day notices have been sent out, and the source says that if Devine doesn’t come up with the $2-million that a seizure of the assets that make up BK Racing is very possible in the very near future.

How Did We Get Here?

Since the team’s inception in 2012, BK Racing has been at the center of several financial disputes and allegations. The team has been a revolving door of drivers year-in and year-out and the consensus reasoning to why drivers won’t stick to running for BK Racing is — money.

In June, a former BK Racing employee — who has been a mechanic in motorsports for more than three decades — spoke to The Final Lap under the condition of anonymity to talk about their time with the team, and how a lack of payment lead to the mechanic finding a job elsewhere.

“They treated me good while I was there, until all of this [payment] stuff started to happen. It was actually a good place to work. Really damn nice good guys, and every one of them are racers, every one of them. And they want to win, but you can’t win running junk every weekend.”

The former employee of BK Racing, went on to explain why he classified their racecars as junk, “We had good cars, and good chassis, but when you have a stack of motor parts sitting in the corner; cams, heads, lifters all that stuff that has been run for three or four years and you’re putting them back in the motor — you’re already 70 horsepower down from everyone else. That’s why they run where they run. In the back of the pack.”

When approached with the subject of old engine parts and things of that nature, Devine scoffed at the idea. However, The Final Lap has since obtained an official BK Racing budget for 2016 and the first half of 2017. In the Profit and Loss that was given to us, under the category of additional engine parts the team has spent a grand total of $0.00 since the start of 2016.

So it appears that the former employee was indeed telling the truth about the worn down engine parts that were being re-installed week after week. The document also shows that the team has not purchased any transmission or gear parts in 2017.

And what about that Tax Lien that was no big deal? According to the balance sheet given to us, if no payments are made to the IRS it will grow to over $1.6-million based on the team’s total payroll tax liability as of May 31st.

That remains to be seen, but it seems the option for Devine to keep all of his current racing equipment rests on him paying off his $2-million debt within the next month. Ingalls is listed as the No. 1 person on the list to receive restitution in a recent UCC filing at the NC Secretary of State’s office:

A UCC (Uniform Commercial Code) Filing is a legal form that a creditor files to give notice that it has or may have an interest in the personal property of a debtor.

If Devine fails to pay off that debt he should have a few more options. Either sell his last remaining charter and move on from NASCAR altogether, or rent race cars and haulers and find a way to piece his way through the remainder of the 2017 season. The next month seems to have a huge impact on the future of the BK Racing team.